This year there’s been several reasons to be proud to be British: The Queen’s Diamond Jubilee, The first Brit in a Wimbledon men’s final for 74 years; A Brit winning the men’s doubles title; Bradley Wiggins winning the Tour de France; oh, a certain prestigious sporting event being hosted in our capital city; and, of course, our brave troops.

Another reason to celebrate being British is the fabulous food that we as a nation produce. This year British Food Fortnight begins on Friday to coincide with, well for fear of sponsorship infringement let’s call them the OG (I think you know the sporting festival we’re referring to).  Normally this celebration of British food takes place in autumn, but it makes perfect sense to promote our excellent produce when visitors from all over the world are descending on the UK.

The tastiest British dishes are those that use fresh, seasonal produce and there is an abundance of this in the British Isles.  For example, there’s nothing more delicious than my personal favourite, Sherry Trifle, but blackberry and apple crumble with a generous serving of custard comes a very close second.  A full English Breakfast, complete with Black Pudding is a great way to start the day; and for dinner steak pie and chips, smoked haddock with mashed potato and spinach, or a classic Cottage Pie.

Even dishes that might sound foreign are actually British interpretations – for instance you won’t find Chicken Tikka Masala or Kedgeree in a traditional Indian cookbook. They were developed for the British to enjoy and call their own.

What should we be doing during British Food Fortnight? 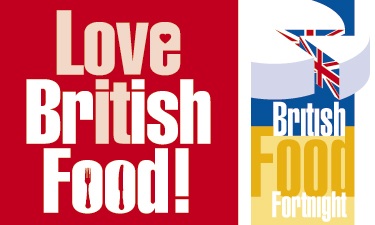 During British Food Fortnight (27th July to 12th August) there are several events up and down the country, all designed to promote British Food. Details can be found at www.lovebritishfood.co.uk  but from a personal point of view, the organisers are suggesting that people make a special effort to seek out British food when they are shopping. This can be identified by looking at a label on packaged goods, or by visiting a retailer e.g. a butcher or greengrocer who sources local produce.

Farmers’ markets are also a great way to buy locally-produced food and there is a great diversity, from bread and preserves to meat, poultry, fish and dairy products, as well as seasonal fruit and vegetables. To find out what’s currently in season click here

You could also eat out at a restaurant or pub that serves British home-cooked food and partner it with drinks produced in Britain – there are hundreds of different varieties of beers, ciders and spirits manufactured in the UK, plus some lovely country wines and sparkling wines.

School kitchens and staff canteens could serve only meals that are distinctly British throughout the fortnight, using good quality ingredients. Plenty of salads, tasty pies, meat and two veg, or stews, fish dishes and British puddings and cakes.

Of course the ultimate in enjoying British food is to grow your own – why not try it, there’s nothing fresher than going to the garden or allotment to gather your fruit or vegetables.

British food is amongst the best in the world, so let’s support our farmers and growers!  As always, make sure that the food you prepare is safe. Click here to find out more about food safety and hygiene with Verner Wheelock Associates.

Previous post: Give Yourself a Sporting Chance in your Next Audit #sportingoffers #legallabelling