We’ve seen several instances of food fraud reported in the papers and on television over recent years. In some cases it’s been cheaper versions of the same product bottled, packaged or labelled as high-end versions – a good example of this is wine. In others one or more ingredient is swapped out yet the labelling remains the same.

The fact is that we’ve probably consumed several adulterated foods in our lifetime without even knowing it: Watered down lager at music festivals; ham and pineapple pizza where the ‘ham’ is actually turkey; Vietnamese river fish and chips masquerading as cod and chips etc. The list goes on and on ad infinitum.

One of the most reported food crimes was, of course, the widespread substitution of horsemeat for beef in such products as lasagne and beef burgers. Dubbed ‘Horsegate’ it shocked a nation, shattered consumer confidence in the food industry, and saw a rise in the public’s interest in the provenance of the food they buy.

Almond and peanut protein found in spice mixes and flavourings 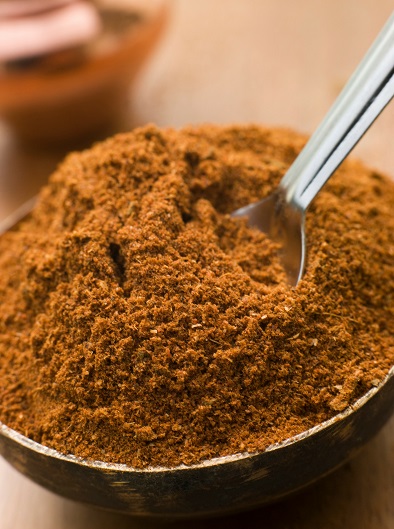 Whilst ‘Horsegate’ was indeed a serious matter, there have been reports of a food fraud which is potentially far more so.  People may not have liked the idea of consuming a horse when they thought they were eating a cow, but eating it didn’t actually do any physical harm – they just felt cheated. The latest food scandal is potentially life-threatening to a small sector of the population who have a severe nut allergy. The crime?: It has been discovered that undeclared peanut and almond protein has been found in paprika and cumin mixes.

One company at the centre of the investigation is called Santa Maria. Its UK base is in Milton Keynes, although the company is Swedish in origin. Santa Maria’s products can be found on the shelves of over 800 Tesco stores in this country in the form of spice blends, peppers and sauces. They also supply mixes and seasonings for the catering industry including Tikka Masala, Grill, Chicken, Steakhouse, Taco and Fajita. The offending almond protein detected in a paprika mix is believed to have been added further up the supply chain, but since it is used in so many products worldwide it will be difficult to detect its source – although Santa Maria and the FSA are currently trying to do just that.

A job for the FSA’s new Food Crime Unit

Britain is certainly not the only country to be suffering at the hand of the food fraudsters. The detection of undeclared nut protein, for example, has triggered the most widespread series of allergy-related recalls in America in at least a decade. Food fraud committed in the US is often an early warning of the need for investigations in Europe. This use of nuts in place of spices is one such instance and it will be the first large scale food crime to be tackled by the FSA’s new Food Crime Unit, which was set up under recommendations following Horsegate.

Failed crops are another indicator of possible food crime. Three-quarters of the world’s supply of Cumin, (which is used as an ingredient in curry and chilli powder and also as a flavour enhancer in ready meals and soups), is produced in Gujarat, India. Exceptionally high temperatures meant that over half of the crop was spoiled last year. This meant that the remaining crop became much more expensive to buy. It is in situations such as this that there is the potential for food fraud. So, for example, ground up peanut or almond shells, might be used to bulk out spice mixes etc. Whilst it is the proteins in nuts which cause allergies, even using the shells can be potentially lethal since some parts of the nut can still be attached.

Symptoms of an anaphylactic shock

Nut allergies range from milder symptoms such as a rash to full-blown anaphylactic shock, which can result in death.

According to the Anaphylaxis Campaign website, the symptoms of severe anaphylaxis are:

(the person may not experience every one of these symptoms.)

Vigilance and testing is key

The unscrupulous types trying to make more money obviously don’t care or consider the devastating effects their simple swaps can have on the consumer. In China in 2008 a massive 54,000 infants became ill and 6 died from infant formula which had been tainted with melamine. There have also been reports of Chinese infant milk containing detergent or hydrogen peroxide and products such as imported vodka have been found to contain lethal substances.

Sadly it’s not enough to simply believe that ingredients are what they purport to be, which is why regular testing and traceability is so important – especially where the substituted ingredients can cause serious illness or death. We need to be vigilant, both as manufacturers and consumers.

To find out more about allergens and how to control them during the manufacturing process, check out our Managing Food Allergens course.

Next post: Ready for a change? Why not become a trainer? #training