You could be forgiven for thinking that ‘umami’ is the name of a hurricane or word concocted by comic Vic Reeves for use on his TV show Shooting Stars. That simply isn’t true. What is true, though, is that ‘umami’ is an invented word, created by Dr Kikunae Ikeda of Tokyo Imperial University in 1908. Its meaning, roughly translated from the Japanese, is ‘yummy deliciousness’ or ‘a pleasant savoury taste.’

Up until 1908 we all thought that we experienced four main taste sensations: salt, sweet, sour and bitter. However Dr Ikeda discovered that the traditional Japanese soup, dashi, tasted neither salt, sweet, sour nor bitter – it had a different taste. After several experiments he isolated the taste and found that it was glutamate. Glutamate is an amino acid released in certain savoury foods, often through cooking or fermentation, which makes them taste so delicious. When combined with a group of chemicals called ribonucleotides which also occur naturally in many foods, the taste buds can’t get enough of it creating the ‘moreish’ umami taste. 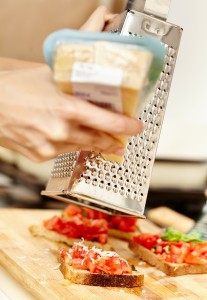 Perhaps the finest example of an umami ingredient is parmesan cheese. Others include cherry tomatoes, soy, mushrooms, cured meats, dried fish, other cheeses, cured meats, slow cooked meats and vegetables, such as soups or broth. It is the cooking of the meat which releases the amino acids (the Maillard reaction) and makes it so tasty. Take a burger, for example. Distinctly unappetising in its raw state, as soon as we start to grill or fry it, it releases a delicious aroma which might make us salivate. Put the cooked burger in a bun with a slice of cheddar and sliced tomato or ketchup and the taste gets even better. The same goes for pizza. This is because cooked meat, cheese and tomatoes all contain different umami-giving compounds. So, to paraphrase a famous Dean Martin song: when the food you desire is a big pizza pie – that’s umami.

Since certain medical conditions have historically been linked to a high intake of salt e.g. high blood pressure and its associated risks, hospitals have cut down on the amount of salt in their cooking. The outcome: the food tastes even blander than before. The good news is that studies have shown that increasing the use of umami substances in salt-reduced food can improve the taste. In fact taste sensation expert Heston Blumenthal worked to create umami-rich dishes to encourage elderly hospital patients to eat more – and they worked on the sample tested.

Create your own delicious savoury flavours

Make your own dashi

Creating dashi (the dish from which Dr Ikeda isolated the umami taste) is easy. Although the ingredients are not run-of the-mill, you can find them in specialist shops or online. Here’s how to make it:

Make a few slits in the kombu and cook it in the water in a medium heat. Remove the kelp just before it boils and add the bonito flakes. Bring to the boil and strain.

Place the mushrooms in the water. Leave for at least 1 hour, then strain. The mushrooms from the stock can be used as a cooking ingredient.

The first one is really quick and easy – it’s cheese on toast with a twist. Instead of using just cheddar cheese, use equal parts grated cheddar and grated parmesan. The splash on some Lea & Perrin’s Worcestershire sauce and grill until brown.

For the second recipe season some pork rib meat, cover it with sea kelp and cook sous vide for 24 hours. Remove the meat from the pouch, cut into 8mm wide pieces and sauté in a frying pan. Whilst the meat is still hot, brush with Marmite on one side.