What is the biggest source of food poisoning in the UK? Campylobacter

Meat contamination has dominated the headlines in recent months. First there was the horsemeat scandal and more recently the recall of Asda Smart Price Corned Beef due to detection of very small levels of the veterinary medicine phenylbutazone, or ‘bute.’

These particular cases have been high profile, reaching the national news, but the reality is that meat contamination is taking place every single day in dozens of slaughterhouses and processing plants. According to the Food Standards Agency (Jan 2013) two-thirds of all raw chicken bought from UK shops was contaminated with the bacteria Campylobacter, affecting roughly 500,000 people per year and killing around 100 people annually.

Campylobacter is a spiral-shaped bacterium which can penetrate the mucus membranes and attack the immune system resulting in a most unpleasant form of food poisoning. Typical symptoms are flu’-like:  high temperature and aches, but also stomach cramps, pain and bleeding, vomiting and diarrhoea. 1 in 1000 people may even become paralysed temporarily as a result of Campylobacter.

90 per cent of Campylobacter food poisoning cases have been attributed to poultry and it is recognised throughout the industry that a high proportion of chickens carry the bacteria. However it is not a disease that can be seen – the chickens don’t look ill.

Proper handing and cooking of raw chicken should be sufficient to kill the bacteria; nevertheless the number of people contracting the disease is still widespread. In the United States there are lower incidences of Campylobacter poisoning. This is because processors use anti-microbial washes at the end of the production line. This process is not currently legal in Europe.

Ironically many people have heard of Salmonella, E. coli and Listeria in terms of food poisoning, but few are aware of Campylobacter, despite the fact that it is the most common cause of food poisoning in this country. We need better education for the public on what they need to do to avoid illness. This includes: 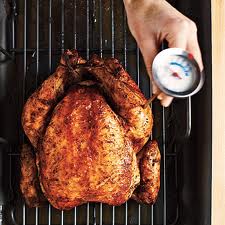 Make sure chicken is properly cooked

Cooking chicken at a temperature of 70°C

You can find out more about Campylobacter by listening to this BBC Radio 4 ‘Face the Facts’ programme, first broadcast in January 2013. http://www.bbc.co.uk/programmes/b01ptzmf