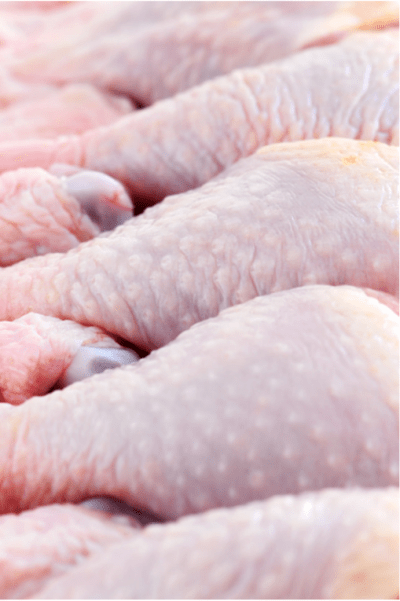 Campylobacter is still one of the biggest causes of food poisoning in the UK, claiming on average 110 fatalities per year, not to mention 22,000 hospital admissions from an estimated 460,000 poisoning cases. Of course, as with many other stomach upsets, hundreds of cases go unreported as symptoms are managed at home.

Campylobacter bacteria live and breed in the intestines of healthy farm animals and poultry and can be passed on to humans when they eat raw and undercooked meat. In fact a Food Standards Agency (FSA) survey five years ago found campylobacter on 65% of shop-bought chickens – a figure that remains very similar today.

The good news is that a new rapid chilling treatment using cryogenic gas is currently being developed, which it is hoped will cut the level of campylobacter infections on the skin of poultry significantly – and meet the FSA’s targets for less than 1000 organisms/gm.

If approved, the new treatment would cost just 4-5 pence per bird to administer. It would mean that the price of poultry would rise; (a product featuring in recent price wars between the big supermarkets) but if it means that the number of people contracting gastroenteritis drops rapidly, surely it’s worth paying a few extra pence at the checkout.

Norovirus and other foodborne diseases

The Campylobacter bacterium might be one of the most likely suspects, but it’s not the only reason for severe bouts of sickness and diarrhoea. In recent years there have been growing cases of Norovirus, also known as the winter vomiting bug, and Hepatitis E. The majority of cases can be linked to contact with an infected person, but a good proportion have been found to be foodborne.  The virus Hepatitis E made life unpleasant for over 600 people last year. It can be transmitted through eating raw or undercooked pork, venison and wild boar.

Raw or lightly cooked shellfish are well-known carriers of Norovirus. The pathogenic bacteria enter the shellfish through contaminated water, (generally containing treated or untreated sewage) which they filter to get their food. As a result the virus builds up within the shellfish. In order to try to combat the infection, the EU is currently considering setting levels for Norovirus per tonnage of shellfish.

Is antimicrobial resistance an apocalyptic challenge?

There is currently no treatment or cure for Norovirus – the body eventually fights the infection itself after a couple of days. However, even in instances where there are drugs available to kill viruses, it is getting more and more difficult to fight infection as bacteria and other micro-organisms become more and more resistant to tried and tested antibiotics.

This ability is known as ‘antimicrobial resistance’ and, according to Chief Medical Officer, Sally Davies, is one of the biggest threats to future food safety. She refers to it as “as big a threat to the UK as terrorism” and calls it an “apocalyptic challenge.” It’s a commonly-held belief that, at the rate things are progressing, antimicrobial treatment for animals and humans will run out in the next 10 to 20 years. This means that antimicrobial resistance could potentially be transmitted through the food chain, as well as through the use of human and veterinary medicines.

Another food safety threat which was identified in the recent Food Manufacture Group’s  safety conference was that of Clostridium difficile, especially a specific strain known as Clostridium difficile 078. This has also been linked to antimicrobial resistance and it is looking more and more likely that cases will begin to emerge as a result of overuse of antibiotics within the food chain.

Consider the safety consequences of reformulation

The pressure on the food industry to reduce the amount of sugar and salt in foods could also have a knock-on-effect in terms of food safety. Since salt and sugar act as preservatives there is the risk that reformulation of products with a smaller percentage could impact food safety.

Being aware of the latest threats to food safety and how to combat them is essential if your job involves the manufacture or preparation of food products. Verner Wheelock are award-winning experts in training for the food industry. We offer a variety of online and classroom-based courses in food safety – click here for more details.