Should the Olympics be sponsored by fast food and snack companies?

There has been much debate recently about the appropriateness of international food companies such as McDonalds, Coca Cola, Cadbury’s etc. being official sponsors/supporters for the London 2012 Olympic Games. The main argument is the perception that sporting prowess goes hand-in-hand with healthy eating therefore, by association, it could be construed that eating a Big Mac meal washed down with a large Coke, followed by a bar of Dairy Milk is healthy. After all, if they’re sponsoring the Olympics, then athletes must consume these products… and athletes are fit and healthy.

But surely none of us is so naive. We know that Olympic sponsorship is about providing funding so that the Games can take place. If it were not available we, as taxpayers, would be footing an ever heftier bill. Yes, it is true that the biggest McDonalds restaurant in the world has been built inside the Olympic village in East London, which seems to go against the whole ethos of healthy eating and sports nutrition! 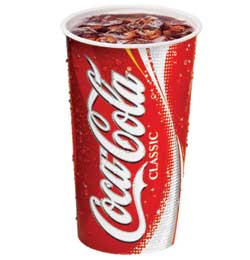 Anyone who is not already aware of McDonalds, Coca Cola, Cadbury’s, Heineken or any of the other sponsors/associates must have been living on another planet. Equally, the healthy eating crusade has been gathering momentum for at least two or three decades now. Most people are aware of the ‘5-a-day’ and know that consuming large amounts of fried, processed, fatty or sugary food long term can be detrimental to health. Nutritional breakdowns are available on most packaged foods bought from supermarkets, so people do have most of the facts at their fingertips.

Eating the occasional chocolate bar is not suddenly going to make your weight balloon, neither is enjoying a burger, chips and coke. In fact a 100% beef burger on its own is perfectly acceptable as part of a balanced diet. Food and drink such as this is fine as part of a diet as long as it is occasional, rather than the norm. As the saying goes… everything in moderation.

McDonalds, and other fast food chains  do in fact offer healthier alternatives to their traditional fayre. You can purchase salads, wraps, and there are also moves to include fruit in their ‘Happy Meals’. Chocolate, too, can have health benefits. It contains serotonin which is a mood elevator and dark chocolate contains iron, potassium, magnesium, anti-oxidants and may help to protect the body against heart disease. Of course, chocolate is also high in calories and fat, so should be considered a treat.

Perhaps the prevailing concern about fast food outlets and branded coffee houses is not so much what they offer (they have taken steps to reduce fat, sugar and salt), but portion size. This has been the subject of a handful of TV documentaries such as BBC TV’s ‘The Men Who Made Us Fat’ and Morgan Spurlock’s documentary film ‘Supersize Me.’ Fast food outlets do publish the calorie and nutrition information about the products they sell, but this is to be found on their websites and not in the outlets themselves. Consequently consumers are unaware of the amount of calories/fat etc. they are consuming when they make their choices at the counter.
The tempting way in which products are sold to consumers, with the option to ‘Go Large’ for an extra 30 pence, gives the customer a perceived value. The extra jump in size makes a barely perceptible dint in the purveyor’s own costs, but it can make a huge difference to the calorie intake of the consumer. The recommended daily calorie intake for a man is around 2500 calories and for a woman is 2000 calories per day. A Big Mac, medium fries and a large Coke, followed by a regular bar of Cadbury’s Dairy Milk chocolate is a whopping 1340 calories – 310 calories is from the Coke alone. The argument from the fast food chains will always be that they are giving the customer choice, but the reality is that customers are rarely going to choose the regular size when there is little price difference for the next size up.

So, should the Olympics be sponsored by fast food and snack companies? Those in the medical profession would certainly like to break the link between manufacturers of foods with a high fat and sugar content and their sponsoorship of sport. Professor Terence Stephenson, the Vice Chair of the Royal Medical Colleges said of the Olympics recently “It’s very sad that an event that celebrates the very best of athletic achievements should be sponsored by companies contributing to the obesity problem and unhealthy habits”.  Tobacco companies used to be prominent sponsors of sporting events but the link between their products and ill-health means that they are no longer in a position to do so. Will this be the case for fast food companies in the future too? They certainly carry much clout when it comes to providing the necessary capital plus they are also involved funding sport and fitness activities within schools. Certainly this won’t happen before 2020 since McDonalds and Coca Cola have Olympic and Paralympic sponsorship deals until then.  In the meantime we need to educate consumers that this type of food, like the Olympics, should be something which is enjoyed occasionally rather than every day.

If you’d like to learn more about what constitutes a healthy balanced diet, click here for information about our foundation level modular online nutrition course.