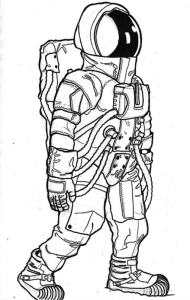 Space…The final frontier… several thousand light years from a dairy farm, bakery or food processing plant. So who’d have imagined that the HACCP food safety management systems we follow today had their origins in the USA’s space programme?

Houston, we have a problem…

Hazard Analysis and Critical Control Point (HACCP) began life in the early 1960s when the Pillsbury food manufacturing company in the USA was asked to develop space food for astronauts on the Apollo and Gemini space missions. Their initial brief was that the food must not crumble, since they needed to avoid particles of food entering the instrument panels or contaminating the atmosphere of the spaceship. With this in mind, Pillsbury began developing food with an edible wrapper, but it soon became apparent that rogue food particles weren’t the only consideration: NASA couldn’t risk an outbreak of food poisoning in outer space, so Pillsbury also needed to ensure that the food they produced was safe.

Up until that point food companies were mainly concerned with the quality of the product rather than the methods employed to reach the end goal. Any testing was generally undertaken once the product had been produced, rather than at critical intervals during the manufacturing process. Microbiologists at NASA began analysing the potential hazards to food from chemical, physical and microbiological sources and any potential areas for concern during manufacturing. Of particular interest were those ingredients and foods which could be contaminated with viral or bacterial pathogens. It was felt that a very small amount of a relatively harmless microorganism, which would have a negligible effect on Earth, could have a different outcome if an  were in orbit, so a list of hazards was completed and stringent testing took place. Here we see the Hazard Analysis part of HACCP taking shape.

The identification of Critical Control Points came when The Army Space Program Office (ASPO) required all food contractors to review their processes, developing models which predicted ‘critical failure areas’ and then eliminating those systems. ASPO also required record keeping systems to be in place which tracked ingredients all the way through the production process, from receipt of raw ingredients.

It wasn’t only NASA who was taking food safety seriously though… Following the recall of baby cereal in 1971 due to physical contamination from glass, Pillsbury’s CEO vowed that they would never again need to recall a product. They then set about putting systems in place to make the pledge a reality and developed the very first HACCP system; a concept with three main principles:

Incidences of botulism poisoning from canned soups and vegetables manufactured by other companies also led the National Canning Association of America to push for formal regulation relating to food safety. Their proposal, which was published by the FDA (Food & Drug Administration) reflected many HACCP principles. For example low acid canned food manufacturers would have to register with the FDA, explain their processes and equipment, code containers, keep records and provide training for their retort operators and can seam inspectors. FDA inspectors would have the power to revoke a canner’s permit if specific safety conditions were not met.

In 1972 a small team of FDA supervisors and inspectors was trained in HACCP by the Pillsbury Company. 1973 saw the first regulatory use of HACCP in the food industry when it introduced permanent low acid canned food regulations.

Nowadays HACCP management is recognised as an essential element of food production. It is a thorough system which allows potential hazards to be identified and controlled at all stages of the food chain, from farm to fork. The seven principles of HACCP are:

When used in conjunction with a series of pre-requisites, HACCP is an extremely effective method of assuring the safety of the food you produce.

Verner Wheelock offers a range of HACCP courses from foundation (Level 2) to Level 4 Advanced HACCP, tutored by industry experts. The next available courses take place at our modern training facility in the grounds of the historic Broughton Hall in Skipton, North Yorkshire. Click on teh luinks below for more details and dates:

Courses tend to fill up quickly so please book early to avoid disappointment – details can be found here. Alternatively, why not consider an in-house course or our consultancy service? (Space suit optional…)

Next post: How to make sure your products don’t create Listeria hysteria #Listeriosis

Previous post: High risk foods most likely to give you food poisoning.