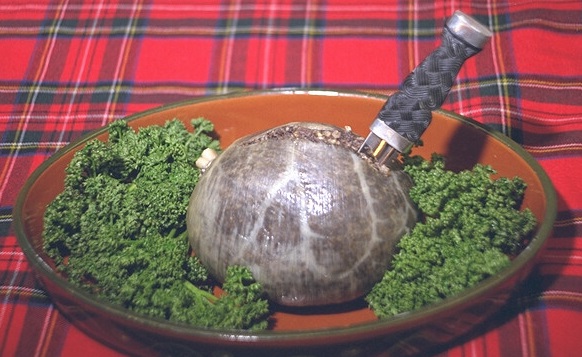 Scots certainly know how to celebrate! And this St Andrew’s day will be no exception. For many families the main meal tonight will be haggis served with neeps (turnips) and tatties (potatoes) washed down with a dram of the good stuff.

I was a student the first time I ever tried haggis. It was St Andrew’s Day 1988 and, whilst I was quite happy to partake in a wee dram or two of whiskey, the thought of eating sheep’s offal boiled in the unfortunate animal’s stomach didn’t exactly have my mouth watering in anticipation. In fact I was dreading it. However in the spirit of the thing (my flatmate was from Edinburgh) I decided to try a tiny bit, just to say I’d had some….

A mound of bashed neeps and tatties was placed in front of me together with a generous helping of what looked like dried-up mince. To my surprise it smelt extremely tasty. Tentatively I took a mouthful…. it tasted delicious. In fact I enjoyed it so much I had second helpings! Which just goes to show that, as with all things in life, you shouldn’t necessarily judge a book by its cover. Sometimes the foods that sound or look unappetising can really surprise us. In the case of haggis, Scots poet Robert Burns even felt moved enough to write an ode to it:

Most modern haggis is made with sausage casings rather than sheep stomachs but the recipe has remained the same over centuries. Minced sheep heart, lungs and liver are combined with onion, oatmeal, suet, spices, salt and stock, put into a casing and boiled for 3 hours. The skin is then split open with a knife and the haggis served – delicious!

Macsween of Edinburgh is perhaps the country’s most famous haggis-maker and also make a vegetarian version of Scotland’s national dish containing black kidney beans, lentils, vegetables, oatmeal, herbs and spices, so everyone can enjoy haggis on St Andrew’s Day, Burns Night or whenever they fancy.

Sticking with traditional Scottish fayre, another dish peculiar to the country is the Clootie Dumpling. The name comes from the cloth used to wrap the pudding in when it is boiled. I have never tried a Clootie Dumpling, but here is a recipe for those who want to try it: 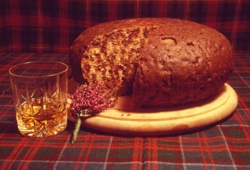 Using a large mixing bowl, rub the butter into the flour until the mixture resembles breadcrumbs. Add the breadcrumbs, caster sugar, dried fruit, bicarbonate of soda, cinnamon and mixed spice and stir to combine. Lightly beat the egg with the milk and add this to the mixture. Stir well, bringing everything together into a firm dough.
Put a large cotton cloth in a heatproof bowl, pour boiling water over it and wring it out as tightly as possible – wear rubber gloves for this. Spread the cloth out on the work surface and coat the uppermost surface with plain flour. Place the dumpling mixture in the centre of the cloth, then bring the edges of the cloth up around the dumpling and secure them tightly with a piece of string. Don’t wrap the cloth too tightly around the dumpling, as it will expand on cooking.
Put a heatproof plate in the bottom of a large saucepan. Place the cloth-wrapped dumpling on the plate and then fill the pan with boiling water so that the water comes 5 cm above the top of the dumpling. Simmer it gently for about 3 hours. Ensure that the dumpling is covered with water at all times, topping it up regularly with more boiling water as required. After the dumpling has been cooking for 2 hours, turn it over.
Preheat the oven to 140C/gas 1. Remove the pan from the heat and lift the dumpling out. Undo the string and tip the dumpling out of the cloth on to an ovenproof plate. Bake it in the oven for about 15 minutes to crisp up the outside. Remove and cut into slices. Delicious served with custard.

Next post: Christmas markets – how to ensure the food you sell is safe

Previous post: Which are the best foods to fight colds and flu?