‘Frankenfood’ or the answer to sustainable food production? 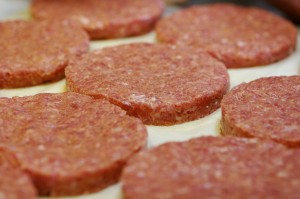 This week the first cultured beef burger was fried, served and eaten in front of the world’s media and broadcast across the internet. Created by Dr Mark Prost of Maastricht University and the result of two years of research and testing, it cost $325,000 to produce. That’s one very expensive burger!

The burger was created from the stem cells of cow shoulder muscle, which were multiplied in nutrient solution and cultured in petri dishes to form the 20,000 strips of muscle fibre needed.  Its lack of fat meant that it did not taste the same as a regular burger, but the team are said to be working on this. In any event it could be 10 to 20 years before we start to see cultured beef in the supermarket.

The intention behind the lab-grown beef is to provide high quality protein for the world’s growing population, whilst avoiding most of the environmental and animal welfare issues which are part and parcel of conventional livestock production. So will this mean the end of traditional burgers and meatloaf? The answer is no – it can provide an alternative or a substitution in those areas where there is a demand for meat, but no ready supply.

Is it a GM ‘Frankenburger’?

Unsurprisingly the lab-burger has caused controversy with people dubbing it a ‘Frankenburger.’ In actual fact the meat tissue used in the lab-burger is exactly the same as the meat tissue that comes from a cow and is used in a regular burger. It has therefore not been genetically modified in any way. True, it is not created in a conventional way, but if you look at any foods you eat many have evolved over the years as a result of man’s intervention. A good example of this is wheat – the wheat we eat today has been modified, refined and processed so that we can use it as an ingredient.

In the Philippines where rice is a diet staple, they are about to submit a new GM variety of rice called Golden Rice for biosafety evaluations. It has been developed to combat a Vitamin A deficiency in the country’s 1.7 million children. The new rice will contain Vitamin A as part of its make-up, which will help to guard against potential blindness, malnutrition and immunity to other disease.

Of course, as with all GM food, Golden Rice has its detractors. Critics say that with a proper, balanced diet there would be no need for GM rice and there is a worry that rice is too precious to tinker with. On the other hand it is reported that two thirds of households don’t eat enough other foods to meet their dietary energy needs, and most of the calories they do get come from rice. So perhaps there is a place for this innovative crop.

If the thought of a beef burger produced in a laboratory doesn’t whet your appetite, how about one made from mealworms? Researchers at Wageningen University in the Netherlands are running experiments to see if insects could become a more sustainable food source than livestock. Apparently growing mealworms takes up only 10% of the land used for production of beef to generate similar amounts of protein and released less greenhouse gases than producing cow milk, chicken, pork and beef. Perhaps the biggest hurdle they will have to overcome is the concept of eating creepy crawlies….

In America they have been growing and eating GM foods for over a decade and as yet no harm has been found to have been caused to the environment or the consumer. Instead farmers are producing greater healthy crop yields from the same acreage without having to spend so much on pesticides etc – the crop naturally repels parasites.

If we consider the foods we consume in the UK and look at the ingredients lists on the packaging, unless they are produce such as fresh fruit and vegetables or fresh meat and fish, the chances are they will contain additives, preservatives or emulsifiers to enhance flavour or prolong shelf life. Breakfast cereals are fortified with nutrients, drinks and snacks are fortified with vitamins: The flour we bake with, for instance contains fortificants such as calcium, iron, niacin and thiamin, which are not currently labelled.

At the end of the day, much of this is up to consumer choice. If we choose to eat natural, organically-produced food, there is plenty of choice.  Just because foods or flavours are not natural it doesn’t mean they are necessarily bad for us. Everything has its place.

If you would like to understand more about how ingredients should appear on food labelling, why not attend our Creative Legal Labelling course on 9 – 10 October 2013.