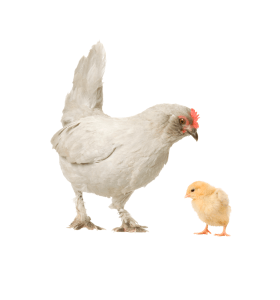 As we know, Campylobacter is one of the most common causes of food poisoning in the UK and is particularly prevalent in chickens and other poultry. If you remember from our previous post, around 65% of chickens sold in supermarkets contain the pathogenic bacteria.

Camopylobacter is present in the guts of animals and generally enters the food chain through cross contamination as a result of poor hygiene practices, or not cooking meat and poultry sufficiently. The bacteria is generally found on the surface of raw meat and poultry. However, Dr Lisa Fisher, a researcher at the Bristol School of Veterinary Sciences, has published a report suggesting that Campylobacter can break through the intestinal wall of chickens and enter the blood vessels– thus infecting muscle tissue and organs such as the liver.

Dr Fisher also found that the rate of infection was much lower in birds which were allowed to develop slowly. This means that people eating faster grown chickens (typically the cheaper chickens used in price wars) are more likely to be on the receiving end of higher levels of Campylobacter.

Dr Fisher’s report has been published just ahead of the Food Standards Agency’s report into Campylobacter in supermarket chicken, which will be published at the end of the month. Part of the report is said to name and shame supermarkets by ranking them in order of the levels of Campylobacter found in the chickens they sell.

Don’t forget that our food safety courses cover how to help prevent Campylobacter and other harmful bacteria from reaching end users’ food. For more information about online and offline courses, just click here.

Next post: The great war – how great was the food? #WW1 #warfood #diet

Previous post: Is your favourite restaurant a five or a zero?