Don’t like the 5p bag charge? – Here’s when you can avoid it 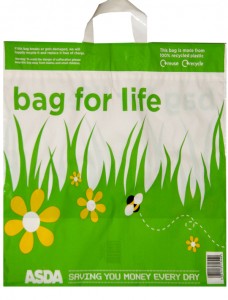 Well, it’s been over a fortnight since supermarkets and major retailers began charging for carrier bags – and who could have predicted the extremes that some people would go to in order to avoid paying 5 pence for a plastic bag. There have been stories of stolen baskets and trolleys, theft of stronger 10 pence ‘bags for life’, and even reports of a major supermarket banning an abusive customer over the bag charge!

Why was the charge introduced?

It turns out that in 2013 over 7.4billion single use carrier bags were given away free to consumers by supermarkets in England. That’s the equivalent of 133 bags per person. The reason for bringing in the new charge is to reduce usage of single use carrier bags by around 80%. In doing so the Government hopes to reduce the impact on the environment and encourage retailers to give the money from the sale of the bags to good causes.  Win-win! Actually it’s win, win, win as far as the Government’s concerned, because 1 pence from each bag sold is VAT, which means an estimated extra £19 Million going into its coffers. (If you don’t like the idea of that, it’s yet another good reason to get into the habit of bringing your own bags!)

Why are some shops charging and others not?

The 5p bag charge applies to companies with over 250 employees.  So even if the shop you visit only has a handful of employees, they might be part of a larger chain of shops, which is why they’re making a charge. Smaller companies can also charge for bags on a voluntary basis.

When you can take a plastic bag without paying a charge 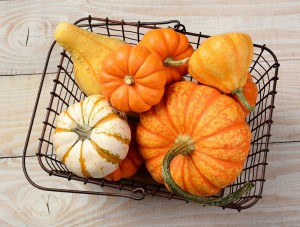 There are instances where you will not be charged for the supply of a plastic bag in a supermarket or similar shop. This is generally when the product you buy is not in its own wrapping, or requires wrapping for safety purposes. The latter includes razor blades, blades and knives. The former includes items such as loose fruit and vegetables, and uncooked meat, poultry and fish.

Other exceptions include products bought for transit (e.g. in an airport or on board a train or ship etc.); prescription medicines; loose seeds, bulbs or corms, flowers or goods contaminated by soil; and live fish, such as a goldfish bought from a pet store.

… here comes the slightly confusing bit. Whilst loose veg, fruits, meats, fish etc. are eligible for free plastic bags, if they are then placed into another bag with non-eligible products in, then a charge will be made for the large bag.

So is it just easier all round to bring your own bags when you go shopping?

The answer is yes and no. For regular groceries where everything is tinned or suitably packaged, then the answer is yes. When it comes to raw meat or vegetables which have soil on them, the bags should not be re-used. This is because even though the meat or fruit etc. might be wrapped up, there is still the risk of cross-contamination, especially onto fruits which might not be washed before eating (although of course you should always wash fruit – even if it has a rind, like melon). Cross contamination risk is the reason why certain previously free plastic bags are exempt from the 5p charge.

Washing ‘bags for life’ which have had loose meat etc. in them will still not remove all bacteria, so it is better to be safe than sorry, and use separate plastic bags for these types of food. Once they are in their separate bags you can then put them safely in a ‘general’ shopping bag or bag for life.

The best way to avoid contamination and potential food poisoning when carrying shopping home is to: 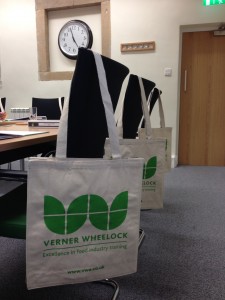 Yet another great reason to train with Verner Wheelock!

As anyone who has attended one of our courses at Skipton will know, we give all delegates a Verner Wheelock tote bag in which to carry their course materials. This also doubles as a handy (and pretty strong) washable shopping bag, which can be used over and over again. So why not book onto one of our courses and get one for yourself? All details and dates can be found here.