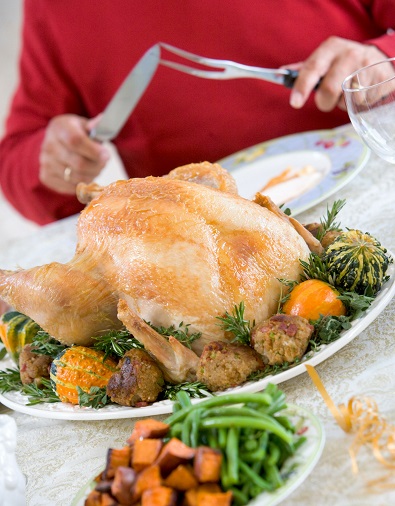 If stringent food safety and food hygiene practices are not adhered to, there is the potential for food contamination to raise its ugly head at any time during the journey from farm to fork. Certainly proper handwashing, making sure surfaces and utensils are clean and wearing the appropriate protective clothing are good as starting points in its control, but there are several other ways in which microbial contamination can occur –not least in the storage, cooking and reheating of food.

The latter is a lesson that is unlikely to be forgotten in a hurry by the chef and manager at The Railway Hotel in Hornchurch, East London. They were jailed for 12 and 18 months respectively when their unsafe food practices gave 33 people eating a turkey Christmas dinner a distinctly unfestive gift – food poisoning caused by the bacterium Clostridium perfringens. Tragically one diner died as a result.

Cooling and reheating – get it right!

How did the contamination occur? The turkey was cooked the day before the dinner was served (which is fine), but it was not allowed to cool properly and, critically, it was not reheated adequately before being served to the customers.  Clostridium perfringens multiplies very quickly under the right conditions, (i.e. room temperature), which is why it is often referred to as the ‘buffet germ’. It can be killed by ensuring that it is cooled to below 5°C and reheated to a temperature of at least 70°C. Reheated food should be piping hot all the way through – the best way to test this is with a food thermometer.

Serving contaminated food was not the Railway Hotel’s only crime, however. It also transpires that food safety records had not been kept up-to-date and were hastily falsified prior to inspection. This deception and the fact that unsafe food had been placed on the market meant that the chef and manager weren’t the only ones to suffer the long hand of the law: Pub chain owners Mitchells & Butlers were fined £1.5 Million.

Are we likely to die from food poisoning?

As we have mentioned in previous blog postings, the most common form of food poisoning in the UK is Campylobacter, a bacterium commonly found in raw poultry (but also red meat, unpasteurised milk and untreated water). In fact two-thirds of all supermarket chickens are infected with it – I refer you to last year’s naming and shaming of retailers.

Campylobacter food poisoning symptoms are unpleasant – flu-like fever, stomach cramps, diarrhoea, pain, bleeding, vomiting and, in rare cases, temporary paralysis – but they rarely lead to death.  As an example there were just 88 UK deaths linked to Campylobacter in 2009.

Contracting Listeriosis is a completely different kettle of fish, especially for vulnerable groups such as the elderly, the very young, pregnant women and those recovering from an existing illness. Most people who are infected with the Listeria bacterium are hospitalised and sadly one-third of them will die.

In the grand scheme of things, thankfully deaths as a result of food poisoning are relatively rare, which is the very reason they make front page news. Nevertheless they should serve as cautionary tales to anyone who thinks they can cut corners when it comes to preparing and serving food.

It is mandatory for anybody involved in the manufacture or handling of food for public consumption to be trained in basic food safety. This even applies to volunteers preparing and serving food for groups such as over 60s lunch clubs and childminders who serve food to children in their care.For larger concerns, especially where a considerable volume of food is being prepared and served, training needs to be at a higher level and a HACCP management system needs to be developed, implemented and verified.

At Verner Wheelock we offer expert training in HACCP and Food Safety, from basic Level 2 to advanced Level 4. Basic food safety training is even available as an online course, to be taken at a time to suit you. Our students regularly attain high grades in examinations, but perhaps more importantly, they acquire the skills and the confidence to ensure that the food they prepare and serve is safe.

For more information on our Food Safety and HACCP courses or to find out about our Consultancy services, please visit www.vwa.co.uk  If you attend one of our courses you might even be nominated for a Verner Wheelock Award!