Being a bit of a chocoholic, I can’t believe I’ve only just realised that it’s Chocolate Week. Yes, there is a whole 7 days dedicated to the appreciation of chocolate. So you have my permission to sack off the diet and gorge on a sharing (LOL!) bag of Maltesers , a whole bar of Green & Blacks or take a trip to Hotel Chocolat or similar.

Whilst you’re downing your Dairy Milk, here are some chocolate-related facts for you to ponder:

To most ‘Death by Chocolate’ is an extremely rich, chocolatey dessert. But did you know that there was a Nazi plot to kill Sir Winston Churchill during World War Two, using bars of exploding chocolate?

The expensive-looking  bars, branded ‘Peter’s’ were actually made of steel and covered with a thin layer of real chocolate. They concealed an explosive which was designed to detonate when the bar was snapped. The plan was for double agents to place the bars amongst other luxury items destined for the War Cabinet dining room.

Luckily the plot was discovered by British spies who tipped off MI5 Senior Intelligence. Posters were issued and the public were told to remain vigilant.

Here’s another fact relating to this era. Did you know that Nutella spread was invented during World War Two? It happened when an Italian pastry maker wanted to make his cocoa supply go further, so he mixed in hazelnuts. 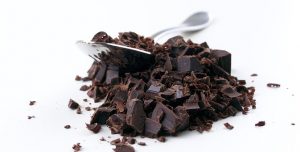 Good news: there are health benefits

Chocolate contains alkaloids which are linked to serotonin in the brain. This is why eating it can make us feel happy. Studies have shown that it can also lower blood pressure and the risk of cardiovascular disease. There is ongoing research into whether it might contain anti-cancer properties. Other studies suggest it can improve our cognitive abilities. It’s also more effective in treating a persistent cough than codeine.

Of course, the above benefits relate to eating chocs in moderation. Plus, they relate to dark chocolate with a high cocoa content. Guzzling your own body weight in Galaxy bars will almost certainly do more harm than good.

Why you shouldn’t give chocolate to dogs

Interestingly, although the alkaloids mentioned above can be beneficial to human health, the same is not true for dogs. So, no matter how much your beloved pooch begs, don’t be tempted to give him any choccy treats. One of the alkaloids is called theobromine. It is this which causes the poisoning in canines. Unlike humans, dogs can’t metabolise theobromine effectively. This puts pressure on their nervous system or kidneys and can result in seizures, muscle spasms, vomiting and incontinence.

It is smaller dogs who are in the most danger of poisoning. For example a 25g bar of chocolate will have a more severe reaction on a Yorkshire Terrier than on a large Labrador. Even if dogs aren’t given chocolate, they have a way of sniffing it out, so make sure that it’s kept out of harm’s way. 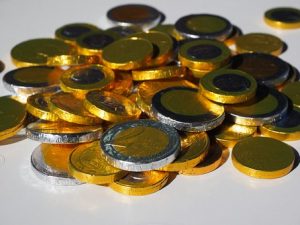 These days we get a ‘salary’ which is a throw-back to the time when salt was highly prized. For the ancient Aztecs, however, chocolate (or, rather the cacao bean) was the currency of choice. Whilst some of us might dream of being paid in chocolate, it’s probably not that practical…

Gone are the days when you had to lick stamps to stick them to an envelope or parcel. That’s no bad thing, as the taste wasn’t exactly great. I might have been tempted to lick a Belgian postage stamp a few years ago though. That’s because in 2013 Belgium issued a limited edition of chocolate flavoured stamps.

Ever watched Alfred Hitchcock’s thriller, Psycho? Me too! However the famous ‘shower scene’ becomes far less scary when you realise that the ‘blood’ is actually chocolate syrup! It’s consistency and rich colour works well because it’s filmed in black and white.

I absolutely love the film ‘Willy Wonka and the Chocolate Factory’ starring the late Gene Wilder. Luckily for them the film was released in 1971, which was 19 years before the Food Safety Act 1990. It wouldn’t have been much fun if it had been storm trooped by an Environmental Health Officer! He would have been delivering non-conformances on the failure of Oompa Loompas to wear suitable clothing. The chocolate river would have had to be drained. Plus he would, no doubt, demand to see Wonka’s HACCP plan!

Enjoy the rest of Chocolate Week!

Next post: Safer food production – training is the key