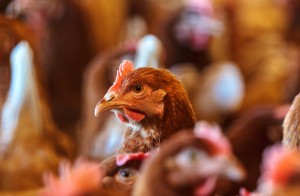 According to the Food Standards Agency the risk of getting avian influenza (bird flu) through the food chain is very low. There have been a few cases of this occurring, but in order to catch it, it would mean very close contact between humans and infected live birds. It is highly unlikely that you would become infected yourself by eating an infected bird.

The latest outbreak at a farm in East Yorkshire, which supplies ducks for the Chinese food industry, is a highly pathogenic strain of the virus (H5N8) as far as other birds are concerned, but does not pose a risk to the general public. Nevertheless, those carrying out the humane culling of some 6,000 birds at the farm will be offered antiviral medicine as a precautionary measure. Any carcases, eggs and other contaminated material will be disposed of and disinfection of the premises will take place.

The strains of avian flu which have caused severe illness in a handful of humans are the H5N1 and H7N9 viruses. Other strains which have affected humans include H7N7 and H9N2, but these have rarely caused serious illness. As mentioned above, though, it is very rare for humans to contract bird flu.

How do birds catch bird flu?

Avian flu spreads from bird to bird by direct contact or through contaminated body fluids or faeces. In order to try to contain the spread of the virus, stringent biosecurity is in place. There is currently a 3km protection zone and a 10km surveillance zone around the East Yorkshire farm. Other poultry rearers and bird keepers in the area are being requested to be particularly vigilant for signs of avian flu and to contact their vet if they are concerned.

Signs of the most pathogenic type of avian flu include a swollen head, blue discoloration of the neck and throat, loss of appetite, diarrhoea, fewer eggs laid, and respiratory distress such as coughing, sneezing, gaping neck, gurgling or rattling.

Precautions for farms with a suspected avian flu outbreak

If you suspect your premises might be infected you need to impose the following restrictions – many of these are similar to the restrictions placed on farms during the Foot and Mouth epidemic in 2001 and subsequent outbreaks:

Whilst it is highly unlikely that avian flu will enter the food chain, an epidemic of bird flu and the resulting culls is likely to push up the price of poultry. This is because volumes will need to be built up again and the farmers will need to try to recoup some of the cost from birds which have had to be destroyed. Farmers whose birds are killed under orders from the Government or the Animal and Plant Health Agency (APHA) may be entitled to compensation if birds are not diseased at the time of killing – they will receive the value of the birds. However no compensation is available for birds which are already diseased or dead before the order; or for any consequential losses.

Our heartfelt sympathy goes out to all farmers who have been affected by bird flu.

Previous post: The great war – how great was the food? #WW1 #warfood #diet