Well it’s harvest time again, so that can only mean one thing. It’s British Food Fortnight! We might only live on a fairly small island, but as a nation we produce literally tons of food. From meat and poultry to quality fruit, vegetables, fish, dairy products and cereal crops it’s all there to be celebrated (and eaten). 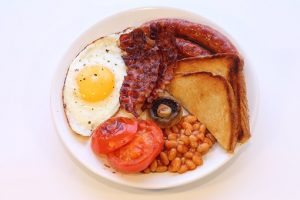 There are plenty of dishes that are quintessentially British. You could start the day with a Full English Breakfast, then have Cullen Skink* or a Scotch Egg for lunch. Why not have an Eccles Cake later on – or treat yourself to Afternoon Tea. Dinner could be Shepherd’s Pie or Steak and Kidney Pie with seasonal vegetables. Or you could have a traditional roast with Yorkshire Puddings and roast potatoes. Fancy a take-away? Good old British Fish and Chips with mushy peas.

If you’re following a low-carb diet, what about some British Black Pudding? Made with pork fat, onions, oatmeal and blood it’s also packed full of potassium, calcium, magnesium and protein. Apples, plums and pears are also plentiful in British orchards at this time of year. Blackberries, gooseberries and rhubarb all make delicious pies and crumbles. The British are experts at comfort food, but there are also scores of healthier dishes using a variety of fish and seafood from British shores.

Plenty of restaurants, supermarkets and grocery stores are making a special effort to champion British food this fortnight. In many cases you’ll be able to find out exactly which farm the meat you’re buying was reared on, or which local dairy made the ice-cream.

You will also notice that there is now more information about food products in the public domain. The horsemeat scandal was uncovered over four years ago. Ever since then there has been a noticeable tightening up on traceability. Food manufacturers have to obtain certificates of authenticity from suppliers if they are to satisfy a BRC audit, for example. Training companies, like us, began to introduce workshops on TACCP and VACCP. This was to help identify any threats or vulnerabilities within the supply chain. Our legal labelling courses have also been incredibly popular. Manufacturers and producers need to ensure that their packaging copy correctly reflects the contents according to current food legislation.

Make sure the food you buy or prepare is safe

Post-Brexit there’s a chance that we might all be buying more food produced in Britain. This is because there is currently much debate about border controls and import tariffs. Buying British food, or locally produced food is not only good for our economy. It’s also better for the environment. The less distance food has to travel, the less fuel is used. It’s also fresher. 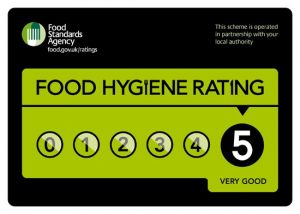 No matter where the food is from though, you need to make sure that it is safe to eat. That’s why good Food Hygiene Ratings are so important in restaurants, take-aways and cafes. It’s also why Food Safety training and HACCP training is essential in food manufacturing environments. Remember, if you’re handling or serving food, you need to have basic food safety training as a minimum. This doesn’t just apply to large companies – if you’re serving cakes and tea in a church hall, you’ll also need food safety training.

*Cullen Skink is not the name of a weedy comic book hero. It is a smoked haddock, potato and onion soup originating in a place called Cullen in Moray, Scotland.

Previous post: Root Cause Analysis – get to the heart of the issue