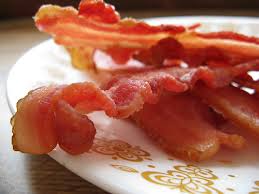 Pigs might not fly, but time certainly does! It doesn’t seem like 12 months since the last time we were blogging about Bacon Connoisseurs’ Week and yet here it is again – in its 7th year.

Actress Fay Ripley is behind this year’s campaign to revolutionise how we think about bacon. It’s not just for breakfast, you know! There are over 100 different varieties of bacon cures in Britain alone and several different cuts. The ‘Love Pork’ website is encouraging consumers to experiment with this versatile and well-loved meat to create delicious dinners, lip-smacking lunches and breakfasts with a difference. There are lots of bacon recipes to try on www.lovepork.co.uk so, what are you waiting for? Get cracking (or should that be crackling.)

It should come as no surprise that in order to produce quality bacon, you need good quality pork. Pork carrying the Red Tractor mark means that the relevant farm has been inspected at least four times per year; rigorous standards are observed throughout the supply chain at all stages; the country of origin is guaranteed; and, given the recent furore over horsemeat it’s reassuring to know that every aspect of the pork meat production process is fully traceable.

Animal welfare is also an important element of the Red Tractor guarantee. It signifies that the quality of pig husbandry and animal welfare is high where the meat has been produced. Although the UK has had an outright ban on sow stalls since 1999, EU welfare legislation banning the use of sow stalls only came into force on 1st January this year. The latest reports show that 80% of EU countries are not compliant and even the largest exporters of pork such as Denmark, Germany and Holland have failed – yet another good reason to buy British.

Bacon is a useful source of protein and two rashers of grilled back bacon (50g) contains about 13g of protein. Protein is needed for bone health and aids muscle strength as we get older. Protein also helps keeps hunger at bay

Bacon is a good source of Vitamin B1 (Thiamin), with 50g containing 35% of your RDA. Thiamin is needed for energy release and is important for general vitality.

The fat content of Back Bacon has reduced dramatically over the years, the visible fat having been trimmed from 15mm to 0mm. This means that whilst in the past back bacon may have contained 28% fat it is now down to less than 8% fat. With further trimming this can be reduced to 4% fat

Bacon as a hangover cure

According to researchers at Newcastle University’s Centre for Life, the Bacon sandwich is the king of all hangover cures! Apparently the high level of carbohydrates and protein break down into amino acids, which boost the body’s level of amines and clear the head

According to research by a well-known air freshener brand 34% of British men think the smell of a Bacon sarnie makes them the most happy!

According to The Daily Mail (24 Jan 2013) The £150 Bacon Bling sandwich, for sale at a coffee house in Cheltenham is made up of seven rashers of rare breed pig, truffle spread, water cress, a free range egg, sliced truffles, saffron, edible gold dust and finally cooked in truffle oil. The cafe owner has created the ultimate greasy treat in a bid to raise money for two charities – and hopefully earn a place in the Guinness Book of World Records.

For more information about nutrition and food safety, click here