Anyone who knows Dr Verner Wheelock will be aware of his passion for and research into healthy eating. He had, of course, worked as Head of the Food Policy Research Unit at the University of Bradford prior to setting up Verner Wheelock Associates Ltd in 1990.

On 10th May 1995 VWA organised a conference at the Royal Society of Medicine entitled ‘Healthy Eating: What’s in Store?’ which was attended by local authorities, representatives from the health service and some of the more pro-active food manufacturers. The programme included presentations of papers by eminent food technologists and nutritionists with titles such as ‘Antioxidants: The case for fruit and vegetables in the diet’ and ‘Wine and health: red wine in a balanced, healthy diet.’

The Government had a healthy eating policy well before the Food Standards Agency introduced the Eatwell Plate in September 2007. The conference was an opportunity to present awards for the best products and share ideas and experiences. The following year Dr Wheelock published a book entitled Implementing Dietary Guidelines for Healthy Eating. It was also around this time, the mid-nineties, that a VWA delegate won the first RIPHH Nutrition Award – in fact VWA delegates won several awards in the 1990s and 2000s and it was a disappointing year if they didn’t get one! 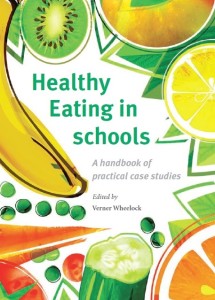 Healthy Eating in Schools – Verner’s next book is published

You could be forgiven for thinking that TV chef Jamie Oliver was on a one-man mission to improve school meals. His programme ‘Jamie’s School Dinners’ was recorded in 2004 and broadcast on Channel 4 in early 2005, but there were plenty of others looking into this area. Step forward one Dr Verner Wheelock, who had commissioned and compiled a series of case studies focusing on schools, local authorities and businesses that had successfully improved the food being served to school children. These were brought together in his book Healthy Eating in Schools which was published in 2007.

As well as the case studies themselves, the book included valuable information and guidance on improvements in the choice and quality of food; Pupil involvement in Healthy Eating Policies;

Better behaviour of children due to the provision of breakfast; and Fruit tuck shops as well as other relevant aspects of school food such as Allergies; Research on Food and Behaviour; OFSTED and Healthy Eating; and Procurement and Local Sourcing.

The TES Magazine gave it the following review:

“The book is entertaining, readable, and a useful, practical handbook for anyone who wants to do something about what’s on the menu in their school.”

Around the same time, VWA also ran a number of conferences entitled ‘Healthy Eating in Schools‘

The birth of the BRC Global Standard

The British Retail Consortium had been formed in 1992, a couple of years after the birth of VWA. But it was not until 1998 that they produced the first edition of what has now become their Global Standard for Food Safety. In those days it was called the BRC Food Technical Standard and Protocol for food suppliers.

The Food Safety Act of 1990 had introduced ‘due diligence’ into the mix, which meant that compliance was now a whole different ball game. Before, retailers used to rely on supplier warranties, now this could no longer be the case, so most of the major food retailers set up their own inspection teams. This meant that a supplier could be visited by a number of independent EFISIS-approved auditors. The BRC standard meant (or was supposed to mean) that only one audit was necessary.

To become an auditor within a company, you needed to have Lead Auditor training, something that VWA were prepared for. They had developed a four-day course that was specifically targeted to the food industry. The first tutor to teach the course was John Gymer, who was highly-respected in this field. Later the mantle was taken up by Peter Clarke, one of our longest-standing and popular trainers, who still trains the Lead Auditor course to this day and has developed it over the years to keep it fresh and relevant.

We are currently on issue 7 of the BRC Global Standard and continue to assist companies by providing a BRC V7 Update course, as well as our various auditing courses that are now approved and certificated by FDQ.

To find out more about our auditing courses, please click here

Next post: Would your company pass an unannounced food safety audit?